Although the COVID pandemic temporarily pulled the rug from under the aviation industry, Air France has already reorganized its network and is also operating its flights to Hungary again, explained Ildikó Kiss, the head of Air France – KLM in Hungary.

“In early June, Air France was one of the first among the traditional airlines who resumed its flights to Budapest. We started with four flights a week, and by the end of July, Air France planes arrived in Budapest ten times a week. And from mid-August, two Air France flights a day have been providing air connections between France and Hungary” – analyzes Ildikó Kiss, adding that about 170 destinations will be available with Air France from September.

While Air France, like other airlines, has received state aid to offset the effects of the crisis, the expert emphasizes that it is not a gift but a loan to be repaid; furthermore, Air France has made serious commitments to cost-effectiveness and environmental awareness in exchange.

“Biofuels, the use of which is at the forefront for the Air France – KLM group, will play a key role in this. Moreover, we no longer use the so-called first-generation, but instead, the second-generation biofuel, which consists exclusively of recycled ingredients. In addition, we also use many other methods to reduce the burden on the environment. This also includes the modernization of the fleet, because the more modern the aircraft, the more favorable the use of fuel. There are also some seemingly small steps, such as how to wash planes. We even make sure to use as little water as possible and the most environmentally friendly detergent available. To reduce fuel consumption, we try to seize every opportunity to reduce weight on the aircraft. We take care of such details as not to unnecessarily take those printed newspapers on board that also have an electronic version. It may be just a few pounds on an airplane, but that also makes a difference. Similarly to recycling used staff uniforms – we sew carpets from them for business class.”

According to Ildikó Kiss, it will take a long time for air transport to rebuild itself, but Air France continues to believe in the Hungarian market unabated, while making every effort to ensure that its passengers can travel between the two countries in maximum safety, even in the event of a global pandemic. 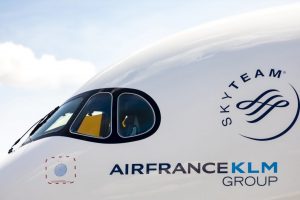 Air France, which has been flying to Budapest since 1967, was formed in 1933 by the merger of several smaller airlines. Its Global HUB Airport is Paris-Charles de Gaulle Airport, with a secondary hub at Paris-Orly Airport.

The French airline is a founding member of the Sky Team, one of the world’s leading global airline associations. The merger/unification of Air France and the Dutch KLM in 2004 created the largest European airline of the period. In 2008, the Air France – KLM Group formed a revenue- and profit-sharing transatlantic joint venture with US Delta Air Lines.