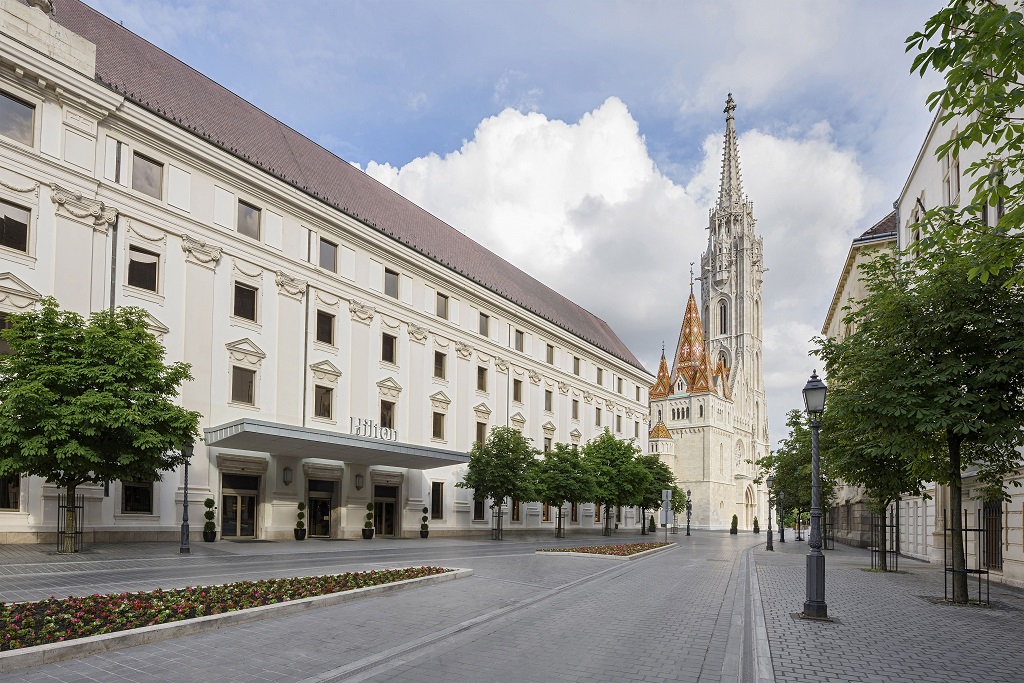 The Hilton Budapest, opened in Buda Castle on New Year’s Eve 1976, opened a new chapter in the development of the Hungarian hotel industry, and has been a successful example of American-Hungarian economic cooperation in recent decades. According to GM Peter Knoll, the hotel, which was completely renovated by 2019, has come back to life again this year.

– What does it mean for Hilton Budapest to be part of one of the best-known American companies, and how does this translate to employees and especially guests?

– Being part of the Hilton network allows us to do marketing to one of the largest bases of guest loyalty card members, Hilton Honors, that is around 100 Million members. Hilton, which recently celebrated the 100th anniversary as an international brand, provides next to the marketing also the access to the Hilton University, which allows for several basic training elements that are related to Hilton core values, Hilton brand standards but also skill training and development programs. With this, it is essential that each Hilton Hotel has their own training manager and for each 100 employees a dedicated qualified trainer. Both is the case for the Hilton Budapest.

As for the guests, they can of course expect and enjoy the standard Hilton has set as a brand standard in advance. This applies both to the design of the rooms and the quality of service, such as the legendary Hilton Breakfast. This is positive for both the travelling guest and the hotelowner, because those who come to Hilton hotels can be assured that other Hilton hotels around the world will have similar standards of quality.

– Hilton was one of the first major Western hotel brands to open in Hungary. How would you describe the past decades?

– The Hilton Budapest opened its doors to guests on 31 December 1976, and it is perhaps no exaggeration to say that it opened Hungary’s doors to the Western world at the same time. The Hilton chain was the first Eastern European entity to set foot in the closed world of socialism. The hotel building, the result of the collaboration of more than a hundred companies, was extraordinary in every way. Even the question of building a hotel in a historic setting had already caused quite a stir among the public.  In the decades that followed its opening, many celebrities, public figures, politicians and film stars chose the hotel as the venue for their Budapest stays, as evidenced by contemporary news reports and the memories of our staff and guests.

An extraordinary social life took place within the walls of the hotel, with numerous restaurants (from Hungarian to fine dining), a casino and a bar catering to the needs of the international clientele.  Among them were celebrities such as Sir Roger Moore,  mint Leonard Bernstein, Sir Roger Moore, Naomi Campbell, Cindy Crawford, Alain Delon, Belmondo, David Bowie, Santana, Pelé, Jacques Chirac and Jiri Menzel film director.

– Hilton has been working with the Danubius Hotels chain from the beginning, which can be a good example of successful US-Hungarian economic relations. How would you describe this?

– Thanks to the expansion of the Hiltonhotel chain in Eastern Europe, Hilton Budapest has also been a pioneer in introducing Western hotel industry standards to the country.And thanks to its 50 years of existence, our owner, Danubius Hotels, has become one of the cradles of Hungarian professional training. The hotel chain has played a lion’s share in this with its broad portfolio, and the role of the Hilton Budapest, which operates according to international standards, is unquestionable. Since then, the company has continued to place great emphasis on training young talent, which could be one of the key factors in the recovery from the current labor market crisis.

– The covid has hit tourism the hardest. How did you survive?

– With the start of the pandemic and the closure of the Hilton Budapest, it was essential to ensure that we can retain the talents that would be required to re-open the hotel as well as the base line staff that will support this. Being part of the Danubius Hotels company, we have distributed our resources during the closure to ensure that whoever was able to assist the group, could find work. For those that could not be re-allocated to our open hotels during the 14 month when the Hilton Budapest was closed, were kept on standby with a financial support, allowing them to  work external for a limited period of time until they were able to return working for the Hilton Budapest again.

When it comes to the re-opening, Hilton quickly developed the Clean Stay concept to re-open already hotels with a safe environment in June 2020. Additional to this, the Event Ready was introduced, allowing a safe planning and execution of events in the hotels. Due to the closure of borders and travel restrictions, we could only start implementing in a small quantity the Event Ready in summer 2020, where we hosted about 10-12 weddings and family events. Unfortunately, it did not allow us to open the hotel in full, as there was no demand that would have allowed for an economical operation of the hotel. Needless to say, by the beginning of summer 2021, we are again prepared with everything possible, so we could open whenever it was ready to be opened again. The fact that the UEFA 2020 was held in June 2021, we did open for this, especially as we were a host hotel for one of the teams in the first knock-out round. 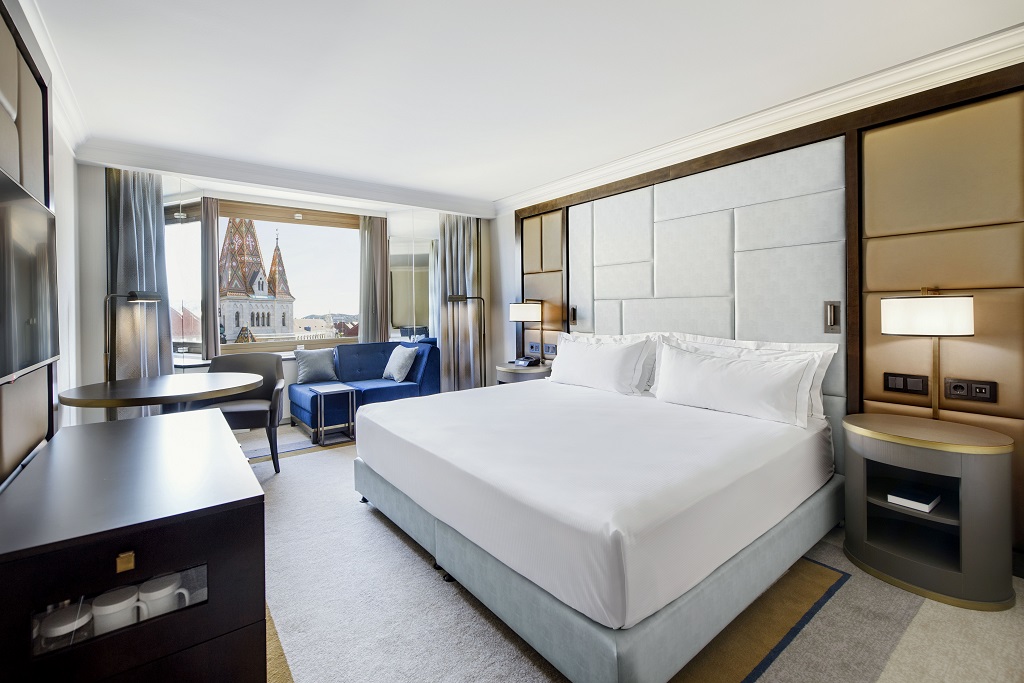 The Clean Stay program became now a new brand standard for Hilton worldwide and the guest appreciate this as it provides them with a safe place to stay when they travel. This, combined with the fully renovated rooms of the hotel, the brand new 11 rooms that were added in the North Wing, the new LÁNG Bistro concept all allow for the guest to feel next to being safe, comfortable and in a modern and stylish hotel that looks new with historical elements that now become even more of a highlight.

– What are your plans for the near future? The good news is that Americans are already traveling to Hungary.

– The American business on the leisure side was coming already back in 2021 summer. The good relations of Hilton Budapest as well as the brand Hilton allowed for a good base business from July until the end of October. Unfortunately, the new travel restrictions, i.e. requirements, prevent American tourists from travelling more freely. Due to this, the numbers are currently stagnating to going back, however, we are looking very positively into the next spring/summertime, when we expect again the return of the passengers of cruise ships and other leisure travelers. Unfortunately, one of our key markets, the MICE segment, will still be very soft for the next year and we anticipate seeing a return of the larger events only in 2023.

Strengthening competitiveness is not only in the interest of American companies, it is a key to the advancement of the Hungarian economy

Because the American dream is based on hard work, the American Chamber of Commerce, an advocacy organization founded in 1989, is committed to the...
Tovább
The American connection

2021 marks the centenary of the diplomatic relationship between the United States and Hungary, which began 100 years ago in 1921. And while political relations between the two countries have not always been smooth, American companies have long been a successful presence in the Hungarian economy. According to Gábor Farkas, partner at PWC Hungary, they have played a major role in the development and healthy growth of the Hungarian market economy after the fall of communism.
Tovább
The American connection

Ford’s vision: the carmaker with Hungarian genes is aiming for a dominant role in the electric car race

There are few American economic success stories to this day that have been influenced by Hungarian know-how. One of them is Ford's legendary model, the Ford T-Model, which paved the way for mass production of cars and was fathered by the company's chief engineer, the Hungarian József Galamb. According to Attila Szabó, Managing Director of Ford Hungary and Czech, the automotive industry is undergoing a revolution, and Ford, which is also building on its tradition, is playing a major role in this process.
Tovább
Kövesse AzÜzletet a facebookon is!Tetszik