Ford’s vision: the carmaker with Hungarian genes is aiming for a dominant role in the electric car race

There are few American economic success stories to this day that have been influenced by Hungarian know-how. One of them is Ford’s legendary model, the Ford T-Model, which paved the way for mass production of cars and was fathered by the company’s chief engineer, the Hungarian József Galamb. According to Attila Szabó, Managing Director of Ford Hungary and Czech, the automotive industry is undergoing a revolution, and Ford, which is also building on its tradition, is playing a major role in this process.

“For us, 2021 got off to an excellent start after the recovery of demand in the car market in the fourth quarter of 2020, when deliveries were uninterrupted. But by the beginning of 2021, the chip shortage was already starting to bite, which did not have a negative impact at that time because we were selling cars that were produced in 2020. It is true that at the end of 2020, it was not possible to build up significant stocks because, although production picked up in the summer of 2020 as the pandemic receded, by the autumn another wave of the pandemic had reappeared, making it difficult to stock up at the end of the year. A good illustration of the situation caused by the shortage of parts is that, while stock clearance was always carried out at significant discounts at the beginning of the year, existing cars were sold out at full price in the first quarter of 2021,” says Ford Hungary’s front man.

Adding that despite the supply challenges, Ford’s Hungarian dealers and Ford are having a good year, with the brand maintaining its 30 percent share of the Hungarian CV market in a declining global industry. This is thanks to Ford’s car plants operating at full speed except during the most difficult spring period of the covid. Demand remained strongest not just for CVs, but for SUV models, the most popular category, while demand for classic cars fell slightly.

“Our contract backlog for 2021 remained very strong, not only in comparison to last year, which was the year most affected by covid, but even in comparison to 2019. This is also a major achievement because the pace of production was slower to keep up with order fulfilment due to a shortage of parts,” he assesses.

The managing director said that company fleet purchases continue to dominate the Hungarian sales, with a 75-80% share, while private purchases, which are described as retail sales, have fallen slightly due to sales difficulties caused by the shortage microchips. However, among the flagship commercial vehicles in the corporate segment, Tourneo Custom and Connect have seen a marked increase in private purchases, while retail sales are strongest in the SUV category.

According to the CEO, the industry-wide chip shortage has multiple causes , one of which is the sudden surge in demand for notebooks and other IT devices for online communication, as the home office has become more commonplace in the wake of the pandemic. This has been compounded by unforeseen misfortunes such as the February freeze in Texas, which affected local chipmakers, and the March fire at the largest Japanese automotive chipmaker.

“The other chipmakers have responded to this situation with new investments and capacity increases, which have not benefited the car manufacturers. This is because the new investments have led to the emergence of new, more modern technologies, while car manufacturers prefer to use older technology, i.e. more reliable chips. But even so, the situation gradually improved, as the supplier destroyed by the fire returned to production around June, when trouble struck again as a new wave of the covid epidemic hit South East Asia, resulting in factory closures. A major blow because this region already accounts for more than half of global chip supply. The effects of all this, which are still being felt today, have gradually begun to filter back into the car industry. In addition, the pandemic closures and environmental disasters have also set back other component manufacturers: just think of the difficulties faced by several German suppliers as a result of the floods in Germany this summer. Together, this has called into question the prevailing global just-in-time system based on immediate delivery without stockpiling. In response to this, Ford has signed a very strong strategic agreement with one of the largest US chip manufacturers, the positive effects of which will be felt as early as 2022,” says Attila Szabó. 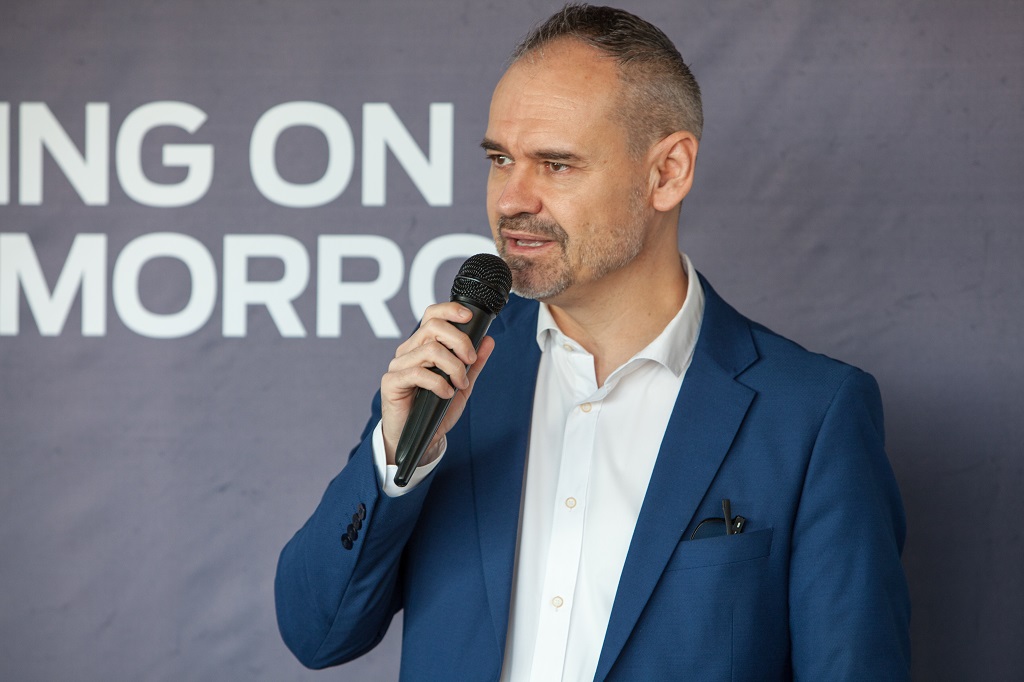 But Ford has not only established a strong presence in America, but also in Hungary. True, it does not operate a car factory, but with more than 40 suppliers in Hungary and nearly 70,000 employees producing parts for Ford, many people see the brand as a quasi-Hungarian car manufacturer. Not to mention the fact that Ford’s 600-strong shared service centre, the Ford Business Solution Europe largest in Europe, which also handles finance, marketing, production planning and HR, is also based in Hungary.

“Ford is also seeking a strong Hungarian presence as one of the European strongholds of battery production, which is crucial for the electric car industry, will be Hungary. This is demonstrated by the fact that the Ford Kuga, the plug-in hybrid model with the largest sales volume in Europe, with nearly 50,000 units sold, is on the roads with a Hungarian battery pack,” says Attila Szabó.

The most important aspect of Ford’s Hungarian heritage and the role of József Galamb is that the launch of the Ford T-Model has triggered a revolution in the car manufacturing industry that is still going strong today. And Ford has built up a professional knowledge and tradition over the last hundred years that can serve as a basis for the new automotive revolution that is currently taking place.

“The new fierce competition in the industry is illustrated by the fact that a company’s vision is more important than brand building or stock market presence. Ford has been able to quadruple its share price in the last 12 months because it has become clear to investors that the brand is set to become a leader in electric cars. The success of Ford’s Mustang Mach-E and the rise of the  E- Transit in the commercial vehicle sector are testament to this. And the ful electric F-150 Lighting, which has made such a breakthrough in the American pick-up truck segment that all models are sold out three years in advance.

“That’s why, together with SK Innovation, the largest US battery manufacturer, we are building a new $11.4 billion battery plant, which will be joined by a new F-150 Lighting plant to reduce the environmental impact of the vehicle assembly process, right next to the battery production site. As a result, Ford has already invested $30 billion in electric car manufacturing, instead of the $10 billion previously targeted. As a result, Ford has also acquired a very significant 12 percent stake in the newest dynamic electric start-up, the pick-up truck manufacturer Rivian,” explains the CEO.

He added: In a changed world of automobility, the success of the US automaker, which has gone global, continues to benefit Hungarian professionals in many areas.

Strengthening competitiveness is not only in the interest of American companies, it is a key to the advancement of the Hungarian economy

Because the American dream is based on hard work, the American Chamber of Commerce, an advocacy organization founded in 1989, is committed to the...
Tovább
The American connection

2021 marks the centenary of the diplomatic relationship between the United States and Hungary, which began 100 years ago in 1921. And while political relations between the two countries have not always been smooth, American companies have long been a successful presence in the Hungarian economy. According to Gábor Farkas, partner at PWC Hungary, they have played a major role in the development and healthy growth of the Hungarian market economy after the fall of communism.
Tovább
The American connection

The digital world has changed significantly in the last 20 years, affecting human habits and transforming the way we manage and handle data. IDC...
Tovább
Kövesse AzÜzletet a facebookon is!Tetszik