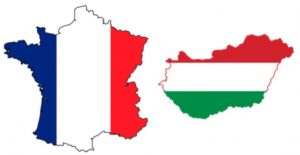 It is not purely symbolic that shortly after KLM, Air France was also one of the first to restart its flights to Budapest, but also because Hungary and France are connected by a myriad of threads and because, the economic relationship has traditionally been strong in recent years.

The strength of French-Hungarian economic relations is well illustrated by the fact that two years ago the amount deriving from trade between the countries increased by a little more than two percent, approaching 7.8 billion euros, making France Hungary’s eighth-largest trading partner.

In 2018, French exports to Hungary increased by 2.9 percent to 3.5 billion euros, while French imports from Hungary increased by 1.5 percent to 4.26 billion euros. France was the 7th largest export market for Hungarian products and the 10th most important supplier. Hungary is France’s 26th most important market and its 28th largest supplier. Although motor vehicle sales increased by 31.6 percent (EUR 252.85 million) and sales of car parts also grew by 43.8 percent to EUR 148.39 million, aircraft sales fell by 42.4 percent to EUR 52.5 million. This item is highly dependent on Airbuses sold to Wizz Air.

France is an important investor in Hungary. According to the Banque de France, the French presence in Hungary tripled between 1999 and 2016, from € 947 million to € 2.7 billion. Based on recent investments, France is the 4th largest foreign investor here, after Germany, the United States, and Austria, ahead of the Netherlands and Luxembourg.

The primary areas of French investment in Hungary are the food, energy, electronics industries, along with the pharmaceutical, automotive, chemical, and construction sectors. Investments are mainly related to large companies, such as Legrand, Auchan, Groupama, Valeo, PSA, and Michelin, but in recent years the investment activity of French SMEs in Hungary has also shown some recovery. In 2016, almost 600 French-controlled companies were operating in Hungary, employing about 40,000 people. According to another summary, the French-Hungarian relationship will be further strengthened. The French companies are planning a total investment of HUF 40 billion in the near future. They will focus primarily on research and development, innovation, and raising the level of technology, which can help to further improve the competitiveness of the Hungarian economy.