Hungarian-French cooperation in the fight against cancer

Hungarian experts also took part in the international research group, which, a few years ago, linked to the French Servier group, achieved a significant breakthrough in the fight against cancer, and hopefully, the drug will also come out soon.

According to András Kotschy, director of Servier’s Institute for Drug Research in Budapest and chemical leader of the scientific research group, activating the so-called programmed cell death, which is used to kill tumorous cells, can add an important new element to physicians’ tools.

– Programmed cell death is an intrinsic mechanism of cells, the essence of which is that the defective or damaged cells destroy and degrade themselves. However, cancer cells turn off this process, which leads to damaged cells not dying, explains András Kotschy. – This is not the only determining factor in their survival, but it also plays a key role.

Although the principle was known, the involved scientists did not previously have molecules that could have been used to restart programmed cell death by the inhibition of a target protein, MCL-1. Not only did their research team find a solution to this, but as one of the most prestigious scientific journals, Nature, reported, they also managed to make the effect selective. All this in such a way that only the tumorous cells are killed while the healthy ones survive. A reason why Nature’s report got such a special recognition is that an industrial drug research project rarely has the scientific weight to be reported in such a major professional journal.

This was also due to the fact that the so-called MCL-1 protein we studied had been considered by some biologists to be able to restore programmed cell death for decades, while others said that by using this method the whole body would die because healthy cells are also damaged. Therefore, it is an even more gratifying result that our research team was able to create a strongly but selectively binding molecule that functions properly in animal experiments. Thus, we were the first ones capable of repress tumor growth in a living organism in such a manner.

The length of time regarding drug research is well illustrated by the fact that while the research began in 2007, it took Hungarian drug-research chemists ten years to achieve results during their collaboration with French biologists, British structural biologists, and biophysicists. In the process of targeting a protein found in the human body, the drug candidate molecule, which was developed as a result of the research, binds to the MCL-1 protein.

– Cells simultaneously produce proteins that initiate cell death and also those that keep the cell alive. It is true that the amount of proteins that lead to cell death begins to increase in tumorous cells. On the other hand, the production of life-sustaining protein molecules also picks up – analyzes the head of the research group. – My colleagues and I, therefore, sought the answer to how we could break the connection between these two molecules in such tumorous cells, so that the proteins that cause cell death could be released and exert their effects. We did this in a way that our molecule would only bind to the MCL-1 protein to avoid harmful side effects.

Because a very precisely designed compound had to be discovered to achieve the desired result, the research started with a smaller, weaker-binding molecule. As a first step, its structure was changed by chemists while foreign partners studied how the new compounds work. As they became more and more aware of the cause of the changes, they began to shape the molecule, or, as András Kotschy puts it, they recognized step by step how to “sculpt” the drug candidate molecule, observing how it finds the target protein and how it can attach to it. The next challenge was to manage to get the compounds through the cell wall and to make them work there as well. Following the success of the laboratory testing – in vitro –, studies in living organisms – in vivo – could also begin, which proved successful as well.

In regard to experiments on mice, which are frequently applied and proven to be effective in oncology research, the two main questions were whether the drug candidate was effective and safe in humans as well. That’s why it was satisfying to manage to destroy human tumors in mice in a manner that the animals survived. We then sought the help of an Australian research team with extensive experience in the field of cancer models concerning mice. The experiments aimed to decide whether our method was expected to work safely in humans as well, to which the answer was yes. 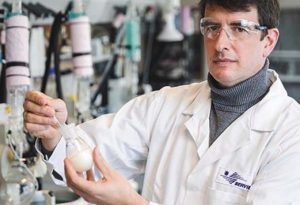 After the successful preclinical trials, the authorization process could be launched, as a result of which the molecules could also be tested for effects and possible side effects in humans in an extremely rigorous process.

– It is also an extremely exciting question whether our drug candidate can be combined with other therapies to increase effectiveness, thereby increasing the chances of recovery, and whether the same cure can be achieved with a smaller amount of chemotherapy. We would use the new drug candidate molecule primarily in hematopoietic tumors, and we hope that the method may be effective in other types of cancers as well. I hope for a real breakthrough, that is, for the drug to be effective for a larger number of patients, from the combination of solutions. However, it will still take more time to be effective.

Describing Servier’s commitment and capital strength, the drug researcher finds it important to point out that the development of a drug can cost up to $ 1-2 billion, while for every successful molecule there are ten that started out successfully but ultimately failed to live up to expectations. The founder, dr. Jacques Servier, who established a pharmacy as a novice pharmacist, then developed from it one of the world’s largest pharmaceutical companies with a strong focus on research, was aware of this, too. One of his first colleagues here was a Hungarian refugee of the Revolution of 1956, László Beregi, a chemical engineer who became Servier’s first research director, thus Hungarian chemists were always highly valued by the founder.

This is also because Servier bought a 51% stake in the Egis pharmaceutical plant in 1995 and full ownership in 2013, and then established its only research institute outside France – in Hungary – 13 years ago. The importance of this is increased by the fact that our country is the only place outside France where all the activities of the Servier Group, which is present in 149 countries, can be found. Linked to this, on his recent visit to Budapest, Olivier Laureau, Chairman of the Servier Group, mentioned that the French-based Servier is an international pharmaceutical company run by a non-profit foundation that not only invests 25 percent of its turnover in research and development but also uses all its profits for development.

The chairman of the group highlighted that in addition to diabetes, cardiovascular, and neuropsychiatric areas, oncology is the focus of their corporate research.

The Servier Group is constantly developing its activities in Hungary – he said, mentioning as an example that by strengthening the operation of the Budapest Therapeutic Research Center, the entire Southeast European activity in this regard will be managed from the Hungarian capital.

Olivier Laureau also mentioned that Servier has been a strategic partner of the Hungarian government since 2014.